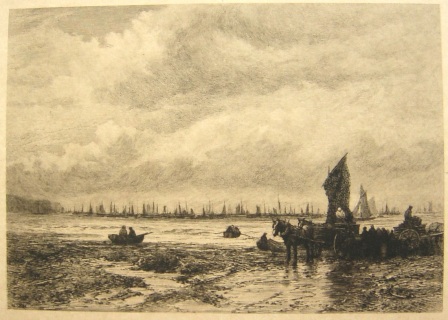 (I believe this is a later re-strike etching)


17.2 x 24.8cm
David Law was a watercolour painter and etcher. He was the father of the watercolour landscape painters Annie and Beatrice Law.

Life:Law, who specialised in landscape painting, studied at the Trustees Academy in Edinburgh from 1845 to 1850. He was an active exhibitor, showing at the Royal Academy, Royal Institute of Painters, Royal Society of Painter-Etchers and Engravers, Society of British Artists, Fine Art Society, Dowdeswells Galleries, Agnew and Sons Gallery and Dudley Gallery. He also exhibited at the Royal Scottish Society of Painters in Water Colours, Royal Hibernian Academy, Glasgow Insitute of the Fine Arts, Royal Society of Artists in Birmingham, Manchester City Gallery and Walker Art Gallery in Liverpool. He entered membership of the Royal Society of Painter-Etchers and Engravers in 1881. In 1884 he was elected a member of the Society of British Artists and in 1887 he became the society's Treasurer, that is, during JW's Presidency (1886-88).

Law was among those artists invited to a private view of JW's 'Notes' - 'Harmonies' - 'Nocturnes' at Dowdeswell's in 1884 (#08683). In 1886 he suscribed to a lottery of JW's etchings in order to help raise money for the SBA (#05276). He was among those invited to a dinner organised by W. C. Symons to congratulate JW on becoming an Honorary Member of the Royal Academy of Munich, a dinner which was to be held at the Criterion in Piccadilly on 1 May 1889 (#05636). In 1888 Law resigned from the RBA in support of JW, whose resignation had been enforced (#03506). However, in 1893 he was appointed an honorary member of the society.