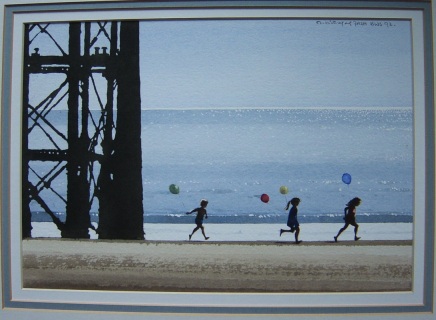 Born in Oldham in 1945, Robert Littleford is a fellow of the Royal Society of Arts and a member of the British Watercolour Society. Littleford’s origins were not those normally expected of artists who achieve such acclaim. Born of parents who were both poorly paid cotton workers, it was not until he was in his mid 20’s that Bob became aware of the talent that lay dormant inside him. It was a chance glance in a gallery window that inspired his immediate and life long ambition, and what a journey it has been. His paintings, with such deep and tender emotions, cannot help but bring a rush of joy to anyone that sets eyes upon them, these every day scenes of family life whether it’s a day at the seaside, a party, or just catching up with the jobs around the house, his paintings make us remember these things with love. Only a man with a disregard for all that is commercial could portray these feelings in such a way, and transport us back to sweet memories of the past.

The simplicity and composition makes this  one of his most impressive works.
SOLD