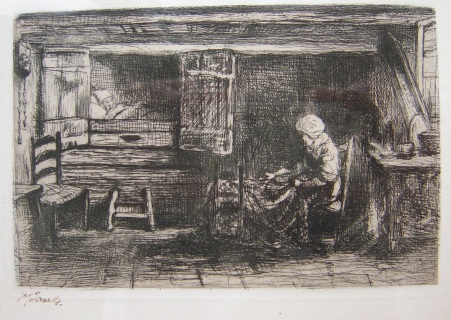 
Publisher:Philip Gilbert Hamerton, LondonNote:Jozef Israels 'Josef Israels': One of Holland's greatest artists of the late nineteenth century, Jozef Israels first studied art in Amsterdam, under Kruseman. In 1845 Israels left Amsterdam for Paris to study in the studio of Picot. He remained there for three years frequently visiting the salons of Vernet and Delaroche. Initially influenced by Romanticism, Israels first gained his reputation as a historical painter. He next turned his talents to landscape painting until, around 1875, he established himself in the genre of studies of peasant life. These powerful figure studies now form the bedrock upon which his fame rests. A major member of the Hague School of artists, Israels shaped the course of Dutch art during the late nineteenth and early twentieth centuries. His influence, however reached far beyond the borders of his native land. In France for example Israels received a decoration from the Legion d'honneur (1867), became an 'officier' (1878) and was awarded the highest Legion position of 'commandeur' several years later. Israels also received awards and decorations from England and the United States. Josef Israels created but thirty original etchings (the earliest dating from 1870) but here, as in his paintings and drawings, he is considered a master. Oud en Versleten is one of Israels' earliest but most telling etchings. Building strong contrasts of light and shade with extensive cross hatching and deep lines the artist depicts an old couple within their modest cottage. Situated prominently to the left, the wag-on-the-wall clock suggests life's mortality. Scholars have regularly compared the etchings of Josef Israels to those of the great French master, Jean Francois Millet. Interestingly, Vincent Van Gogh admired and was influenced by both these great artists. A. M. Hind writes,“Israels's few plates of peasant life, strong in line, powerful in chiaroscuro, rank directly with his paintings in the expression of the depth of human felling, in which he is so worthy a successor of Rembrandt.” *
SOLD
£
0.00
HOME