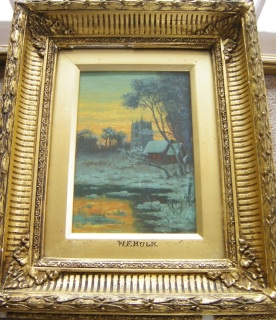 
William Frederick Hulk was a highly regarded painter of animals in landscape, especially cattle. He was born into the famous Hulk family of painters, his father being the marine and canal scene artist Abraham Hulk Senior (1813 - 1897), and his uncle, the canal and townscape painter John Frederick Hulk (1829 - 1911).


William specialised in quiet rural scenes of cattle. The Dutch and Flemish had been the fore-runners of the tranquil pastoral picturesque with Paulus Potter and Verboekckhoven, and Hulk maintained this tradition. He is at his best on a small scale, but also painted man large imposing pieces, which have a Barbizon School feel to them. In 1882 he had moved to Shere, near Guildford in Surrey, to start his won family, and Surrey provided the main landscape for his work. He did produce some Dutch landscapes, and his work was certainly sold over there, so the family connection had been maintained. 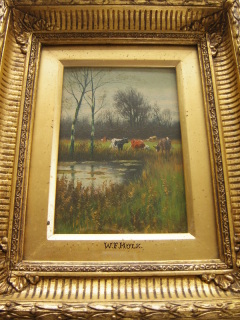 Cattle grazing by a river