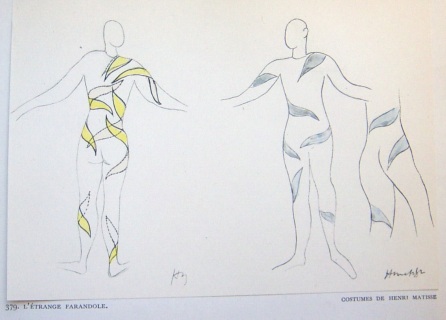 
"Pochoir (French: “stencil”), as distinguished from ordinary stenciling, is a highly refined technique of making fine limited editions of stencil prints. It is often called hand colouring, or hand illustration. The 20th-century artists Pablo Picasso and Joan Miró made prints in this technique for book illustrations. More important was Henri Matisse’s use of stencil... " .... Encyclopaedia  Britannica


Tipped in to Boris Kochno's "Le Ballet"
As Shown.
Will be removed. There will be some marking to the top edge. (Clear of the image)