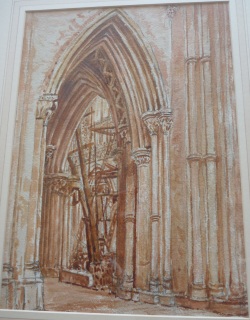 Rev John Louis Petit 1801-1868
Repair on Lichfield Cathedral
28th Oct. 1858
Watercolour and pencil
37 x 27cm
Gilt frame.
An architectural historian and watercolour painter, John Louis Petit played a significant role in encouraging interest in the Gothic style and its revival. As an artist, he specialised in depicting historic buildings, particularly churches, in order to provide a record and illustrate his writings. However, he applied his swift, fresh handling – influenced by earlier topographers – to a wide range of subjects, from Manningtree to the Middle East.

John Louis Petit was descended from the Huguenot family of Petit des Etans from Caen in Normandy, and would prove to be its last male representative.
He was born in Ashton-under-Lyne, Lancashire, on 31 May 1801, the eldest son of Harriet Petit (née Astley) and the Rev John Hayes Petit, perpetual curate of Shareshill, Staffordshire, and owner of the Ettingshall Estate, in the same county. Following his education at Eton and Trinity College, Cambridge (1819-23), he inherited this estate from his father, in 1822, and lived on the profits made from mining the coal, iron ore and limestone that lay within its bounds. In 1828, he married Louisa Elizabeth Reid, in Wye, Kent.
His work is represented in the collections of the Samuel Johnson Birthplace Museum, Lichfield, and Staffordshire Museums and Art Gallery.
£
45.00 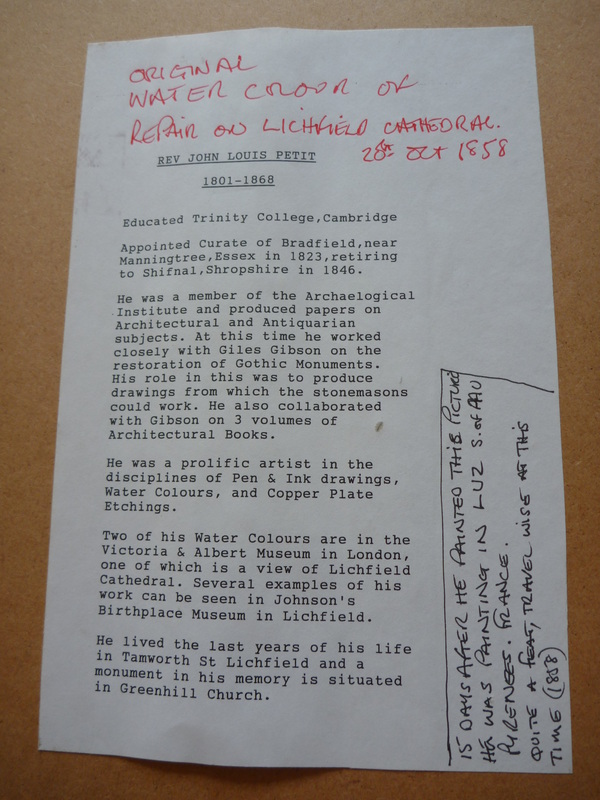