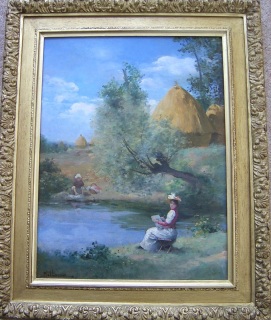 Jules Ballavoine was a genre, still life and landscape painter who was born in Paris in 1855. He studied art at L'Ecole de Beaux-Arts and was a pupil of Isidore Alexandre Augustin Pils (1813-1875), the master of many acclaimed French artists. He made his debut at the Paris Salon of 1877 with a work entitled "Le Bouquet Campagne". He exhibited at the Salon again in 1882, with three works: "Surprise", "Le Marche aux fleurs" and "La Petite Bohemienne", and at the Salons of 1883 and 1886 with "Parmi les Rochers" and "Sur la Terrasse". At the 1886 Paris Salon, he was awarded a medal for "La Seance Interrompue". He also exhibited at the Salons of 1890 and 1897. All of Ballavoine's exhibitions received critical acclaim and with it came prosperity. Whilst initially he found success with his small street scenes of Paris, he became best known for his delicate and exquisitely painted portraits of young women often depicted in landscapes. Examples of his works can be found in many private collections, art galleries and museums in Europe and the US.


An artist of high ranking his works are increasing in value.