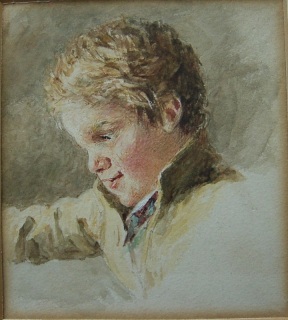 
Not signed, name inscribed on mount.

The boy is John Swain or his brother whose likeness can be seen in many of William Henry Hunts' works.

William Henry Hunt
Best-known drawings (made popular by chromo-lithographs) were from a boy-model (John Swain, 1826-1883) whom he found at Hastings and brought up to London with him. This boy was the original of nearly all the drawings of the type of `Too Hot,' `The Card-players,' `The Young Shaver,' 'The Flyfisher ' (a boy catching a bluebottle), and the pair of drawings of a boy with a huge pie, exhibited under the titles of `The Commencement' and `The Conclusion,' but better known as `The Attack' and `The Defeat,' by which names the reproductions were called. `Who,' wrote Thackeray, `does not recollect "Before and After the Mutton Pie," the two pictures of that wondrous boy? `To Mr. Ruskin and others some of these humorous drawings appeared vulgar, but Thackeray represented the opinion of many good judges when he called them `grand, good-humoured pictures,' and declared that `Hogarth never painted anything better than these figures taken singly.'
.
.
£
0.00